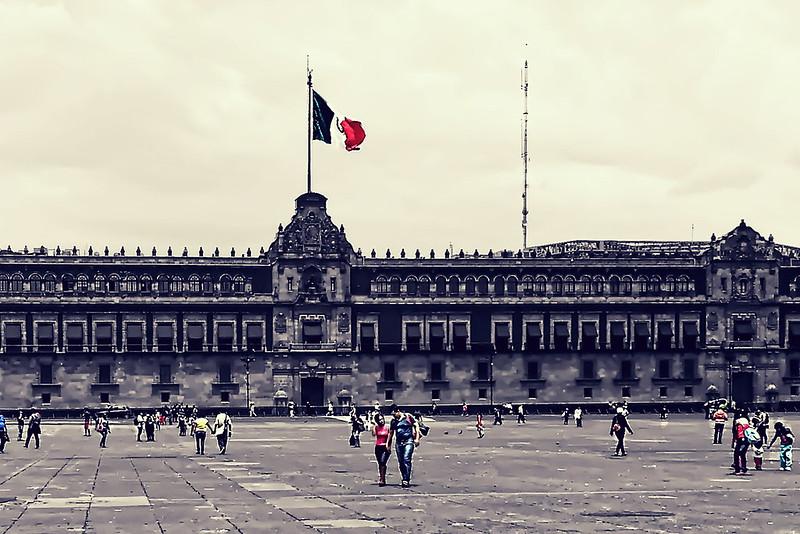 COVID-19 might wipe out decades of poverty reduction and increase global inequality dramatically. According to the World Bank, global GDP will fall 5.2% in 2020. The most affected region economically will be Latin America, were the expected fall in real GDP is close to 7%. Mexico stands out for being the only major economy that has not provide a significant fiscal stimulus to stabilize the income shock (1), as well as for its terrible management of the sanitary crisis (2).

Mexican GDP will plummet. The latest estimates from the IMF and the World Bank calculate a recession of 6.6% or 7.5%, respectively. This is recession will be worse than the 1995 Tequila crisis, which pushed millions of Mexicans into poverty. As I write these lines, we already have some evidence that points at an increase in both poverty and inequality. I mention here four stylized facts:

1.The impact of GDP in household income is likely to be larger than in the 2009 financial crisis. The US financial crisis affected Mexican economy (3) through the global shock in financial markets but also by a reduced demand of exports- which affected the external sector. From 2008 to 2010, income poverty headcount increased by 3 percentage points, from 49% to 52% (4). This crisis is, however, quite different since it directly affects aggregate demand and supply. Financial market crises tend to affect more GDP figures than household incomes, whilst lockdowns and mobility restrictions should affect more disproportionally household income.

2.The effects on the economy are unlikely to be distribution-neutral: the sanitary decree restricting mobility in the workplace for non-essential activities had a larger impact on poorest households. According to a recent study using the ENCOVID (5) made by UNICEF and EQUIDE, only 7.7% of households in low socioeconomic strata had internet at home, compared to 91.2% for households in high socioeconomic strata. Being able to work and attend to school remotely becomes a privilege. According to the latest data from the same survey, unemployment rates are higher for informal workers. In April- the first month with workplace mobility restrictions, the jobless rate for formal workers 10.3%, compared to a 18.4% rate for informal workers (6).

3.Most poor households depend on labor income. The effects on the labor market will have significant impacts on household income. According to the National Institute of Statistics and Geography (INEGI), the percentage of occupied labor force decreased from 60.5% during the 1Q2020 to 53% in June 2020. More than 7 million people have left the labor market. As Chart 1 shows, other income sources like private transfers, social programs or remittances might ameliorate the impact in the poorest 10% of households. However, since the income poverty headcount ratio is close to 50%, this means that households from incomes II to V depend mostly on labor income. 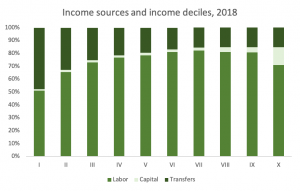 Recent studies suggest a significant increase in poverty under very conservative scenarios. According to the National Council for the Evaluation of Social Policy (CONEVAL), income poverty (7) could increase due the pandemic between 7.2 and 7.9 percentage points (between 8.9 and 9.8 million people will be pushed into poverty). Other estimations made by Lustig et al (2020) account for distributional effects of the pandemic in terms of the economic sectors most affected by the pandemic (i.e. non-essential). According to the estimations, poverty is likely to increase (8) by 7 percentage points (between 8.8 and 11.2 million people will be pushed to poverty). These estimations, however, are quite conservative since they assume a decrease in household income like GDP. As discussed in my first point, the fall in household income could be even higher, so these figures are more likely to be a lower bound.

The current Government of President Andres Manuel Lopez Obrador has been reluctant to increased public debt to deliver a larger fiscal stimulus. According to his plan, their current social programs are more than enough to mitigate the economic impact on the poorest in Mexico. This train of thought is, however, flawed.

First, Lopez Obrador social programs were implemented in 2018 as substitutes to previous policies, so there is no additional transfer income to compensate for the loss in labor income. Second, as shown by a recent Oxfam Mexico brief, current cash transfers are designed to be a complement to the welfare system, and not to counter a crisis in the labor market.

The three largest programs are designed for people who are likely to be outside of the labor force: 1) scholarships for primary, secondary and tertiary education; 2) pensions for people with a disability, and 3) pension for elderly adults. As a complement to the landmark social programs, the Ministry of Economics has pledged to offer 2 million credits for SMEs and people in the informal sector.

These efforts might be inconsequential and even counterproductive: 1) given the high levels of uncertainty, SMEs could not be able to take or repay the credits in a period of six months (the deadline set by the Government to start paying the interests of the credit) and 2) According to the surveys mentioned earlier, 2 million credits might not be enough to reactivate the economy. Government needs to opt for other types of policies, like unemployment insurance and something resembling a basic income. More resources are needed to avoid an economic crisis never seen in Mexico in the last 25 years.

1. According to the IMF, the above-the-line fiscal measures only amount to 0.5 GDP to support households and firms.
2. According to Our World in Data, Mexico ranks 10th in countries with the largest number of confirmed COVID-19 deaths per million people, already above the United States.
3. Mexican economy contracted by 5% in 2009.
4. Using the official, national methodology from the Mexican National Council for the Evaluation of Social Policy.
5. The ENCOVID is a telephone survey that is representative at national level
6. Here, the jobless rate includes the unemployed, people who had a non-paid ”break” from their jobs, and also people who cannot look for a job given the lockdown conditions.
7. Using the national line and official methodology in Mexico
8. Also using the national line and official methodology in Mexico

China’s Infrastructure Investment in Africa - A Case of Sierra Leone

Diego Vázquez is the new Research Manager in Oxfam Mexico. He has experience working for the private and public sector. Previous to this position, he was the Chief Economist in the British Embassy in Mexico City. His main areas of interest are poverty and inequality from an economic perspective. He holds a BA in Political Science and a MSc. in Economics.