Ilustration: picture from the author

More than half of the global workforce is estimated to be in the informal economy. However, informal employment is more concentrated in certain sectors. According to the International Labour Organisation, 81.2 per cent of the estimated 75.6 million domestic workers in the world are in informal employment, making the domestic work sector one of the largest in the informal economy [1]. Compared to other forms of work, domestic work is unique in the following ways; it is mostly carried out by women and children – mainly girl children; private households are the workplaces and the relationship between a domestic worker and an employer is personalised. Given this uniqueness, domestic work is often exploitative. Furthermore, due to the high levels of informality in this sector, its workers mostly experience indecent working conditions. Domestic workers tend to have extremely long and unstructured hours, low wages, little or no access to social protection, lack of labour law protection, among others. The outbreak of the COVID-19 pandemic has exacerbated these pre-existing decent work deficits in the domestic work sector, particularly in developing countries. These consequences were in the form of reduced working hours, in some cases – loss of jobs, increased workload and redundancy among others. For many domestic workers, particularly those in developing countries, there were limited or no social safety nets to cushion the effect of the pandemic.

The decent work challenges in the domestic work sector highlighted in this study are not new. The COVID-19 pandemic has exacerbated these pre-existing conditions. The results presented in this study are therefore useful to inform pandemic mitigation policy and the development of a regulatory model which considers the realities in the domestic work sector. 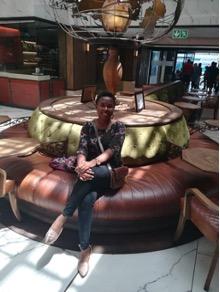 Abigail Osiki currently lectures in the Mercantile and Labour Law department at the University of the Western Cape (UWC), South Africa. She is also a research associate at the Centre for Transformative Regulation of Work, UWC, Cape Town. Abigail’s research background is in working poverty, sustainable development and policy reform, with a specific interest in the informal economy in Sub-Saharan Africa. She recently completed a post-doctoral fellowship with the Fairwork Project. She holds a PhD in labour law from the University of Cape Town.