Can and should the US compete with China in global infrastructure financing? Infrastructure is essential for economic development and promoting the global circulation of people and goods. Studies estimate that developing countries require more than $USD 40 trillion in the next two decades to bridge their infrastructure gaps and help them prosper, especially in a post-COVID world. According to the Asian Development Bank, developing countries in the Asia Pacific region alone face an infrastructure gap of $22.6 trillion though 2030.[1]

In recent years, however, China has taken on the role as a major player in infrastructure investment. In 2013, Beijing launched the Belt and Road Initiative (BRI) which extends to Asia, Europe, Africa and even Latin America. The goal? To reconnect Eurasia with the world through a network of infrastructure and trillions of dollars in investments. The economic impact has been substantial. With thousands of projects under way, China’s trade in goods with other BRI countries surpassed $5 trillion between 2013 and 2018 and FDI exceeded $70 million. The BRI, as a result, renewed focus infrastructure investment and revealed the existing gap between developed and developing countries.

China has championed domestic infrastructure development at a scale never seen before, as European nations began to withdraw investment in the 1990s. China’s efforts to create a new ecosystem were supported by a new cadre of technocrats that led the country’s economic and infrastructure boom. From 2013 to 2020, China invested more than US$731 billion worldwide, enabling it to profit from new markets. [3]

The BRI is backed by strong government support. Investments and financing are essential to realizing connectivity and infrastructure and facilitating unimpeded trade. The BRI’s main funding source are sovereign loans provided by China. The Bank of China, for example, invested more than US$460 billion. The initiative has benefited from the relative ease in operationalizing support. Beijing offers a one-stop shop for finance, insurance, and building for host countries. Compared to Western financiers, the processes are often cheaper and faster. For instance, China is the largest financier and builder of infrastructure projects in Africa.[4]

However, the BRI has become fraught with risks. Its reputation has been challenged by the lack of transparency in its loans, lack of economic sustainability, the unsustainability of its debt, and overdependence on Chinese financing. There has also been considerable concern about the environmental and social impacts on such initiatives. In response, China launched the BRI International Green Development Coalition in 2019 to make BRI investments sustainable and adherent to the United Nations 2030 Agenda for Sustainable Development.

Infrastructure has historically been a source of power in international politics. The BRI’s expansive reach in the region has raised newfound concerns about Chinese soft power and the political leverage acquired by Beijing. Neighboring Japan and Korea launched their own initiatives counter China’s growing influence. In 2018, the EU launched the Euro-Asia Connectivity Strategy to strengthen its presence in region.

The US has not remained passive. The US has created its own infrastructure strategy that includes the Blue Dot Network and the B3W to counter the BRI by investing in infrastructure in low and middle-income countries. The Blue Dot network was established during the Trump administration to promote better infrastructure construction standards and is funded by the Development Finance Corporation (DFC), the Japan Bank for International Cooperation, and the Australian Department of Foreign Affairs and Trade. The B3W, which was announced at the 2021 G7 summit under Biden’s presidency, focuses on promoting good governance and climate resilience by mobilizing private investment.

These initiatives aim to create a competitive advantage for the United States in global infrastructure financing through the establishment of “high standards” that reflect American values and interests such as transparency and financial, environmental and social sustainability.[5] Combined with a limited use of public funds, the high-standard certification process would help leverage a wide range of private capital- especially pensions and insurance funds- to invest in infrastructure and obtain long-term returns. The US also hopes to promote an upward competition of standards that would force Chinese companies to accept Western rule of law and governance standards, thereby extending U.S. influence in the Indo-Pacific.

So can the U.S. compete with China?

Despite efforts to launch alternatives to the BRI, the US has faced several issues, including funding and long-term vision, insufficient state support, and deteriorating infrastructure. The US has not invested in infrastructure development in its foreign policy since the Marshall Plan, and it requires the US$2.59 trillion to maintain its crumbling infrastructure, a problem exacerbated by the political gridlock in Washington.[6]

While the BRI is funded in large part by Chinese public banks and offers a one-stop-shop package of project financing, insurance, and construction, the B3W relies on private funds and offers less convenience. Private companies in G7 countries are reluctant to invest in the developing world. The risks are simply too high for low long-term returns. Currently, bank loans are the largest source of infrastructure funding, while equity investment is lacking. A path forward might lie in PPPs.

China is trying to develop more transparency and standards for its infrastructure investments abroad. However, as China’s overseas investments grow, its influence in other countries’ internal affair may become more apparent.

The US lacks the required institutional mechanism to be fairly compared with the BRI and the DFC cannot compete with the infrastructure diplomacy machinery that brings together and directs policies and guidelines for finance, insurance, and construction companies. The task is not impossible, but will take time, failure and bear uncertain results.

China’s competitive advantage in infrastructure diplomacy is not in failing to comply with the international rules and cutting social, labor, or environmental costs. Rather, it rests primarily in the package it offers: a consolidated government, and institutional machinery that offers finance, insurance, and building infrastructure.

The US can leverage its advantage in the service sector, education, health, and fostering educational and diplomatic ties to better leverage soft power. China views the US as an essential partner in the global economy. The US should try to find synergies with China to contribute to global infrastructure construction and sustainable development.

Financial cooperation has already taken place with the European Bank for Reconstruction and Development, the French Development Agency, and the China-CEE Countries Inter-bank Association- which includes former Eastern bloc countries- that was established in 2017.

To effectively allocate resources and avoid duplicates or overlapping initiatives, the US and China should consider the real needs of the developing world rather than simply fall into the new Cold War divide. Recipient countries are pining for roads and basic infrastructure that support economic development and growth- and partners for the journey.

[3] Treasury Bill (T-Bill) is a short-term US government debt obligation backed by the Treasury Department with a maturity of one year or less. China has steadily accumulated US T-Bills and as January 2021, China owns US$1.095 trillion, or about 4% of the US$28 trillion US national debt. 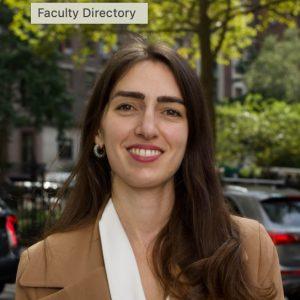 Maria Adele Carrai is an Assistant Professor of Global China Studies at NYU Shanghai. Her research explores the history of international law in East Asia and investigates how China’s rise as a global power is shaping norms and redefining the international distribution of power. In light of the development of the Belt and Road Initiative, she is looking in particular at the economic, legal, and political repercussions of Chinese investments and economic engagement in Europe and Africa. Prior to joining NYU Shanghai, she was a recipient of a three-year Marie-Curie fellowship at KU Leuven. She was also a Fellow at the Italian Academy of Columbia University, Princeton-Harvard China and the World Program, Max Weber Program of the European University Institute of Florence, and New York University Law School.