SUSTAINABLE INFRASTRUCTURE WOULD LEAVE NO ONE BEHIND

The logic of this piece rests on two cardinal norms for creating sustainable infrastructure. First, infrastructure does not consist of its physical components alone, it includes the linked social infrastructure that are likely to be impacted, as well. Secondly, infrastructure is can no longer to be appraised and assessed from its technical perspective alone. Given the non-linearity associated with its impact , monitoring and assessing of an infrastructure project would entail creating a framework that are sensitive to possibilities of butterfly effects.

Development, and for that matter, sustainable development is contingent on access to resources necessary to live a reasonably good way of life, infrastructure included. Without any ambiguity, access to more resources would entail a higher level of development, the way we define development today. However, unrestricted access to resources could certainly jeopardize the sustainability and resilience of the developmental process, as was rightly considered by the Brundtland Commission Report on sustainable development way back in 1987 wherein it was emphasized that the path to sustainability in shaping our common future calls for ensuring inter-generational equity. Development today cannot compromise the interests of the future generations.

The conceptualization of Agenda 2030 has further called for going beyond inter-generational equity and focus simultaneously on intra-generational equity as a necessary condition for sustainable development (SDG 10). It underscored the importance of access to several types of resources, material, environmental and ecological, technological, besides institutional resources that facilitate peace, justice and prosperity, in operationalizing an equitable developmental pathway that would be sustainable and resilient. The incorporation of SDG 17 – partnership for the goals – brings in an additional but much needed perspective so far neglected, that would consider production of and access to “collective resources” as an important input that is necessary for sustainable development.

Collective resources are those that are available in an inclusive manner to the entire humanity. Increased access to these resources all across the globe will, in turn, facilitate augmentation of the global human resource bases in an equitable manner and contribute meaningfully to increased access to other resources, in a qualitative manner, without compromising with the quantitatively limited carrying capacity of nature, vis-a-vis supply of natural resources and absorbing the pollutants created.

The developmental paradigm followed so far respected efficiency, even often at the cost of ignoring equity. The losers in a competitive framework are ideally to be excluded and forgotten and at the most provided with philanthropic support to sustain physically. Infrastructure projects also have been no exception. The first casualty has been obviously nature as it could not raise any demand in return for the damages caused. Losing communities were generally displaced often made to fend for themselves, with an award of minimal monetary compensation, without caring for the associated costs of social disruptions. In this process they have to make do with loss of access to many resources – natural, social and economic – due to forced displacement. The ratio of benefits accruing in aggregate to the society to the costs incurred by numerically smaller numbers of those displaced have been always, by design, estimated to be very high and thereby, justified the project.

Protests by displaced communities against infrastructure projects created in “public interest” were very common till the last decade but are still heard of in many developing countries. Power projects, expressways, mining from hitherto settled land etc. have displaced many communities who have never been consulted during the decision-making process. Generating sustainable infrastructure and using them to facilitate resilient and inclusive development has, therefore, become the most important challenge to humankind, specially against the backdrop of the ongoing pandemic, increasing inequality accompanied by lost livelihood opportunities and the long term threats to climate justice.

Infrastructural design from now onwards has to be truly sensitive to the ecological and environmental constraints that are getting rigid by the days and cannot be wished away at all. The created infrastructure cannot afford to be inequality-augmenting both in terms of access and the capacity to develop and use them. Designing basic infrastructure for collective use irrespective of capacity to produce them will have to be placed at the centre of planning. Here comes the emphasis on SDG 17.

For example, construction of a roadways network is rightly considered a good investment due to its contribution to efficient transportation of goods, services and other factors of production. However, the road network may not be effective if the communities located around the created network either lack the capabilities of producing enough goods and services to add to their potential use of the road network or are not in position to absorb the increased flow of goods and services that the created infrastructure would facilitate.

Such capabilities are contingent upon reduced rates of morbidity and mortality, increased access to knowledge, technology and skills, potential reduction in access to land and other natural resources to make way for construction of the road network that may even contribute to loss of their traditional, land and natural resources based sources of livelihoods, among others. Investing in physical infrastructure without corresponding investments in creating the required the social infrastructure in a complementary manner often nullifies the very objectives of such an exercise.

Take the cases of Belt and Road Initiatives or Cape to Cairo Trans-African highways or the Asian Highway that intend to create road linkages across countries in the world and facilitate speedy flow of goods and services at lower expenses. It is not clear if enough share of investments in these infrastructural projects is set aside to develop the social infrastructure – health, education, skills, energy security or climate justice – for those literally located on both sides along the road with little access to livelihood opportunities linked to modernized economic system. The roads link the major ports and cities lying at two ends of the projected or built up infrastructure and will surely benefit the residents located in those metropolises and terminal cities.

However, those not enough capable to join the high ends of economic development may not potentially participate in the dynamic change and derive their fair share out of the infrastructural gains. Rather, in all probability, they would have surrendered their access rights to natural resources, including land, often in exchange of “hefty” monetary compensation that might not be enough to support their existing occupational pattern in perpetuity.

With no support designed to handhold them in migrating to a new occupational pattern that would coincide with greater ability to use the new infrastructural facilities to their benefits, they would soon lose out and fall by the wayside, being completely excluded from the process of development. Many of them migrate to urban locations, but live in abject distress for lack of sustainable opportunities to earn decent livelihoods. They lack in skills and capabilities to match the demand to provide services that might facilitate their movement up the social and economic ladder and are often destined to join thousands of underpaid temporary urban labour force, living in ghettoes and shanties with hardly any access to the facilities enjoyed by the urbane residents.

It is often found in a large part of the world that those residing along the boundary walls of a power project do not have access to electricity. Ironically, many of them could be found to belong to those families who owned that land on which the power project has been erected to supply uninterrupted power to far flung urban residents. Irrigation systems are found to be supplying increasing share of water to manufacturing hubs and urban pockets, often at the expense of farmers who need adequate supply of water to carry on with their cultivation practices.

To conclude, we would suggest two cardinal norms that cannot be ignored while designing for sustainable infrastructure. Firstly, an infrastructure project must account for not just its physical components and linked issues of economic efficiency, often expressed in terms of calculated returns on investment, but also the social infrastructure of those who may not be capable of deriving much benefit from the built infrastructure and even lose out on available livelihood opportunities. Secondly, the technical, liner approach to infrastructure has to give way to a more humane and complex systems level thinking. And for that matter, return on investment, calculated using the technical norms of financial accounting should be considered irrelevant to bring in the idea of social returns on investment as the centre point of project appraisal, design, monitoring and evaluation.

What’s next for infrastructure? An introduction

Can and should the US compete with China in global infrastructure financing? 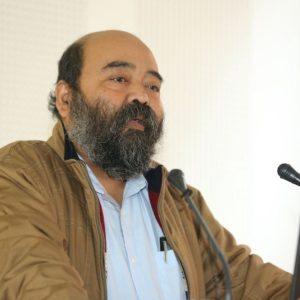 Milindo Chakrabarti is a Professor and Dean (Placement and Internship) at Jindal School of Government and Public Policy at O.P. Jindal Global University, India, besides being the Director of Centre for Sustainability, a research centre located within the University that looks beyond SDGs in promoting inclusive and resilient development. He is also a Visiting Fellow at RIS, India focussing on issues related to development cooperation and serves as the Managing Editor of a quarterly journal titled “Development Cooperation Review”, published by the Global Development Centre, RIS. Prof. Chakrabarti is actively engaged in propagating the idea of “intersecting” as opposed to “extracting” as the main driver of sustainable development and is a member of the Expert Working Group that has prepared a roadmap to Global Public Investment (GPI). GPI is intended to facilitate collective investments in creating global public goods and protecting global common pool resources in a spirit of co-creation, where everyone contributes and everyone benefits, thereby contributing to the goal of creating a planet where no one is left behind.