A womxn’s* (Womxn – includes all individuals assigned female at birth including non-binary and transmen) period typically lasts anywhere between 3 -7 days. It is often accompanied by heavy bleeding, fatigue, brain fog, pain, nausea, and a host of other symptoms. The body is essentially asking for rest while it uses its precious nutritional and energy resources to shed its uterine lining. According to evolutionary dictates, it typically happens in womxn of child-bearing age, every month.

Yet, a womxn’s need to recover during this time is consistently buffeted by market-based notions of labour productivity. This centers around a market-based construct that is male-driven, as the male biological makeup does not require rest at monthly intervals. This has led to a widespread stigma surrounding the inability to be fully productive due to menstrual symptoms – the understanding is to not speak about it and keep it under wraps. Those who can do without the rest are seen as productive members of human society, capable of partaking in a market-driven system.

There are urgent questions surrounding the construct of labour productivity. Especially since it includes a cost on a womxns well-being due to the functioning of their menstrual cycle. It also asks for an expansion in the definition of labour productivity where hours or days missed due to the menstrual cycle are not penalised as low productivity, especially where womxn work longer hours in other parts of their menstrual cycles. More support is also required for womxn to exercise agency on the kind of jobs they can access which supports their choices to rest such as part-time work and hourly paid work.
As it stands, the obligation for women not to rest heightens their stress levels, dilutes their mental and physical well-being as human beings, and affects the family systems which they might be required to maintain.

Menstrual related Presenteeism and Bio-hacking the cycle
A widely cited BMJ study indicates, that 9 productive days are lost to ‘presenteeism’ due to menstrual cycles. Women are physically present but mentally unable to function at work. The study indicates a significant need to explore the links between menstrual-related presenteeism and lost productivity in wider contexts, particularly in developing countries. This exploration should also include lost productivity in womxn due to menstrual-related conditions such as PCOS, PMDD, endometriosis, adenomyosis, perimenopause, etc, where the effects of the menstrual cycle are greatly pronounced. However, the BMJ study plays an important role in highlighting a significant correlation between the menstrual cycle and decreased productivity.

There is now support from the medical community for “bio-hacking” the menstrual cycle to sustain or increase productivity.
According to Dr. Allison Devine, MD this implies “taking advantage of varying strengths that they (womxn) will experience as their natural cycle progresses.” Bio-hacking the menstrual cycle implies that womxn sustain or increase productivity by doing different types of work tasks according to their hormonal fluctuation conditions prevalent during their cycle. This would mean doing more complex tasks in the follicular phase, collaborative tasks in the ovulation phase, simpler tasks in the luteal phase, and reflective or solo tasks during menstruation.
Bio-hacking the menstrual cycle comes with specific presumptions – It is presumed most womxn can choose to work in specific ways according to the prevailing hormonal conditions of their menstrual cycles. This is not true for many women, particularly those with debilitating conditions affected by parts of their menstrual cycle. Also, it is presumed that womxn are allowed to exercise agency in choosing specific work tasks in line with their menstrual cycle. This again may not be true for womxn who are not presented with choices or resources to do that.

Both the BMJ study and bio-hacking support a crucial point. sustained or increased female labour productivity, unhampered by the menstrual cycle is a significant precursor to being included in a market-based system. The only factor that has not changed is the conceptual understanding of labour productivity.

Labour productivity imposes a cost on womxn’s well-being due to their menstrual cycles
According to ILO estimates in 2018, Women formed a significant part of the economy’s labour force, at 48.5% albeit 26.5 percentage points below that of men. It is therefore important to consider how the hidden costs of the menstrual cycle are factored into overall labour productivity in formal and informal sectors.

Investopedia has a comprehensive economic definition of labour productivity. “It represents the total volume of output (measured in terms of Gross Domestic Product, GDP) produced per unit of labour (measured in terms of the number of working persons) during a given time reference period. The indicator allows data users to assess GDP-to-labour input levels and growth rates over time, thus providing general information about the efficiency and quality of human capital in the production process for a given economic and social context”

This neo-classical notion of labour productivity is telling. It is designed as an aggregate that is useful in terms of how labour contributes to the economic growth of a country. However, higher labour force participation rates of men overshadow the significance that womxn have on economic growth. It measures the efficiency of human capital and therefore includes the long-run effects of penalties imposed on a womxns well-being due to her menstrual cycle. In essence, If female labour does not work due to menstrual days or hours, this leads to lesser labour productivity. There is also the case of presenteeism where female productivity is compromised. The resulting significance of lower female labour productivity on economic growth requires deeper exploration.

While determining labour productivity solely in terms of labour output per hour, pre-determined time periods need to be included, other than the 8-10 hour formal sector notion of the working day. The ILO states that labour force surveys might include other notions of time that feature in the underground and informal sectors. However, there is still poor coverage of statistical estimates of labour output in these sectors where a large proportion of womxn are likely to work. Moreover, the ILO report on labour productivity states that “in many countries, statistics on the number of self-employed and family workers in agricultural and informal manufacturing activities are less reliable than those for employees.”

Menstrual cycles should be accommodated by recognising womxn’s agency on when they choose to work (i.e. hourly paid or part-time work). Womxn require access to job resources and jobs for self-employed work, part-time work, or working from home.

There should also be options to access resources and jobs that sync with a womxns menstrual cycle. E.g. hourly- paid work at home during the luteal phase or mensuration phase.

Lastly, official or paid menstrual leave, should be an accepted norm and not an indicator of decreased productivity, given that womxn might be doing increased work on other productive days. 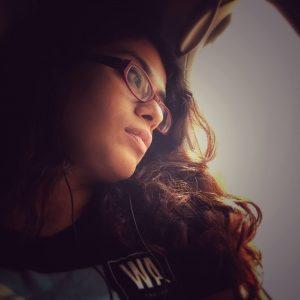 Azania Thomas has had an interesting journey in international development. In 2005, she completed an MA in Economics, completed a teaching certification (CELTA), and worked as a PR and Capacity Development executive for an NGO in Mumbai. In 2007, she moved to Mexico City, where she worked as an English language teacher and Economics Lecturer for 5 years. She felt her work would have more meaning for marginalized populations in developing countries. She returned to India and began work as a training consultant for the British Council’s education programs in 2012. From 2013-2014, she studied at the University of Edinburgh, where she completed an MSc in South Asia and International Development. From 2016-2020, she worked as an education consultant for several British Council education projects across India. She now works as an independent capacity development consultant and writer. Apart from education and skill development, Azania also has an interest in issues affecting health care in India and is presently exploring connections between skill development and healthcare.