Climate change is altering life in the ocean, transforming ecosystems and the services they provide. The Fourth National Climate Assessment highlights the severity of projected climate impacts on coral reefs in particular, which have already begun to experience dramatic shifts. How is climate change impacting coral reefs, and is the outlook for reefs significantly better if we achieve the targets set by the Paris Agreement? In short, is there hope, or are coral reefs already lost? In this Q&A, Scripps Institution of Oceanography graduate student Orion McCarthy explains why reefs are important, how they are changing as our oceans warm, and what we can do about it.

Why are coral reefs important? How would losing corals impact people (other than scuba divers)?

Coral reefs provide vital services for both people and marine life: they serve as habitat for 25% of all marine species and provide food, protect coastlines, and support economic opportunities for over one billion people worldwide. However, not all coral reefs are able to provide these services. As human impacts on reefs increase, we are noticing a shift toward reefs dominated by algae rather than coral. Reefs with fewer corals tend to be less structurally complex and have less habitat diversity, which hinders their ability to support fish and buffer wave energy, changes that have direct implications for coastal communities. Our ability to conserve reefs and preserve the benefits they provide will depend on our understanding of ecological interactions on reefs, as well as our ability to predict how these interactions will change over time.

What is coral bleaching?

Corals have evolved a symbiotic relationship with tiny plant-like organisms called zooxanthellae, which live inside a coral’s tissue. Aside from being the source of a coral’s vibrant color, zooxanthellae also produce food for their coral hosts through photosynthesis, and can provide up to 90% of the energy that corals need to survive. However, this partnership begins to break down when environmental conditions become physically stressful for corals, such as if they are exposed to too much UV light, sediment in the water column, or anomalously hot temperatures. In response to stress, corals lose their zooxanthellae and bleach white, losing their primary source of food in the process. Corals can regain their color if environmental conditions return to tolerable levels within a short enough period of time, but after several weeks in a bleached state, corals typically starve, die, and become overgrown by algae. This is what happened on many reefs worldwide during the 2015-16 El Niño, which sparked the most severe global coral bleaching event on record. While bleaching tends to cause dramatic declines in coral cover on reefs, these declines can be reversed under the right conditions. However, full reef recovery often takes years, if not decades.

The impacts of climate change on corals are multipronged and will likely be severe. Warming sea surface temperatures will cause bleaching events to become more frequent and damaging. In addition to bleaching, reefs will experience more frequent disturbances from hurricanes and cyclones as the oceans warm. If that weren’t challenging enough for reefs, ocean acidification will lower the saturation state of aragonite, a key form of calcium carbonate that corals use to form their skeletons. Thus, not only will climate change cause severe disturbances on reefs to become more frequent, it will also limit the ability of corals to grow back after such events. As corals struggle to withstand these changing conditions, fleshy algae will come to dominate many tropical reefs, further reducing coral cover and fish diversity as a result.

How much warming can coral reefs tolerate? What is the difference between warming 1.5°C vs. 2°C?

The future of coral reefs depends on our ability to reduce global carbon emissions. To give reefs a chance, we must strive to limit atmospheric warming to 1.5°C by fulfilling commitments made under the 2015 Paris Agreement. However, it is also important to recognize that some reefs may not be able to withstand even a 1.5°C increase in global temperatures. A global assessment of coral reefs found that, on average, reefs will begin to severely bleach on an annual basis by 2043 under a business as usual emissions scenario (climate model RCP8.5), but that annual severe bleaching would still begin to occur by 2054 under a reduced emissions scenario (RCP4.5). While the difference of 11 years between climate scenarios may not seem like much, the study found high variability in the onset of annual severe bleaching in different regions. This suggests that the difference between the impacts of warming 1.5°C vs. 2°C may be more pronounced for some reefs than others. No two reefs are the same, and it will be important to identify reefs with the best chances of surviving moderate levels of warming so that they can be effectively managed. Is there hope for coral reefs?

In the wake of the 2015-17 global bleaching event, most public facing communications about coral reefs have focused on widespread coral death and reef decline. The global bleaching event was indeed severe in many locations – for example, 81% of reefs in the northern Great Barrier Reef experienced severe bleaching – but we are also seeing important signs of hope. On the Great Barrier Reef, scientists recently found unexpected diversity of shallow water corals at depths of 40 to 150 m, a darker and cooler environment that is likely to be less impacted by bleaching. The researchers suggest that the potential exists for these corals to aid recovery in adjacent shallow reefs after bleaching events, although more research is needed to know for sure. Similarly, on Jarvis Island, scientists noted an abundance of calcifying rather than fleshy algae following recent severe bleaching, a positive sign that indicates the ecosystem is likely on a path to recovery rather than decline (certain types of calcifying algae help to bind the reef substrate together and serve as a settlement surface for baby corals). And in East Africa, scientists observed a lower incidence of bleaching in 2016 on reefs that had previously bleached in 1998, suggesting that some coral reefs have the ability to acclimatize over time with repeat exposure. While there is still a lot we don’t know about the corals, algae, and fish that inhabit coral reefs, these findings suggest that reefs are resilient systems with the capacity to recover and adapt as our oceans change. Going forward, it will be important for scientists to continue studying the ecological processes that underpin reef recovery, and to communicate findings from studying these “hope spots” to inform efforts to conserve reefs.

What action can be taken to help coral reefs persist as the climate changes?

For reefs to persist through the 21st century, each country should honor their commitments under the Paris Agreement to reduce greenhouse gas emissions, and to ward off the worst impacts, they should make even more stringent commitments in the coming years. Climate change is bigger than any one country or region, and we must work together as a global community to address it. However, climate change is not the only threat facing coral reefs, which can be degraded by local threats such as overfishing, sediment runoff, eutrophication, unsustainable tourism, and coastal development. Mitigating these threats requires local action, such as designating marine protected areas, enacting fisheries regulations, changing land use policies, mitigating erosion and runoff, and planting corals on degraded reefs (i.e., reef restoration). No single strategy will be appropriate for every reef in every location, but with the help of good monitoring data, scientists and reef managers can make informed decisions about which strategies to use on a case-by-case basis. Depending on the location, these local actions may allow reefs to remain resilient enough to persist as ocean conditions change.

What are scientists at Scripps Institution of Oceanography doing about coral reefs and climate change?

Managing coral reefs requires good data, but making sense of this data is not always easy. Coral reefs are complex ecosystems, and it can be hard to decipher how ecological and physical variables are interacting on a reef across multiple scales in space and time. The research we conduct in Dr. Jennifer Smith and Dr. Stuart Sandin’s labs aims to answer fundamental ecological questions about how coral reefs function, both in the presence of human stressors and on pristine, remote reefs where these stressors are absent, such as on Palmyra Atoll where we have been collecting data for the past ten years. In addition to studying corals and coral reef fish, we also study calcifying and fleshy algae, key constituents of the ecosystem that are often overlooked. In addition, we are currently undertaking a global effort through the 100 Island Challenge to digitally archive reefs at 100 Islands around the world. The 100 Island Challenge uses a combination of traditional survey techniques and innovative imaging technologies to develop 3D models of the benthic environment. This allows us to analyze spatial and demographic patterns back in the lab, and to study how different communities change over time in the presence or absence of different stressors. Findings from these research efforts will help to inform conservation decision making and contribute to the scientific community’s broader understanding of how these important ecosystems function. 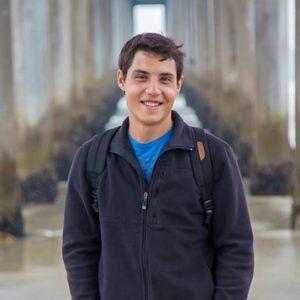 Orion McCarthy is a first year graduate student pursuing a PhD in Dr. Jennifer Smith’s lab at the Scripps Institution of Oceanography.